Pink eye, formally referred to as conjunctivitis, is one of the most frequently seen eye diseases, especially with kids. Conjunctivitis can be caused by bacteria, a virus or even irritation from pollen, chlorine in pools, and ingredients in cosmetics, or other products that touch the eyes. Some types of pink eye can be quite communicable and rapidly cause a pink eye outbreak at schools and in the home.

Pink eye occurs when the thin clear layer of tissue lining the white part of the eye, or conjunctiva, gets inflamed. You'll be able to recognize the infection if you notice redness, itching, discharge, or swollen eyelids and eyes that are crusty early in the day. There are three basic categories of pink eye: allergic, bacterial and viral conjunctivitis.

Viral conjunctivitis is often caused by a similar virus to that which produces the recognizable watery and red eyes, sore throat and runny nose of the common cold. The uncomfortable symptoms of the viral form of pink eye will usually last from one to two weeks and like other viruses cannot be treated with medication. To relieve discomfort, compresses applied to the eyes will give you some relief. The viral form of conjunctivitis is transmittable until it's gone, so in the meantime maintain excellent hygiene, remove any discharge and avoid using communal towels or pillowcases. If your child has viral pink eye, he or she will have to stay home from school for three days to a week until it clears up.

The bacterial form which is caused by infections such as Staphylococcus or Streptococcus is most often treated with antibiotic eye drops or cream. One should notice the symptoms disappearing within three or four days of treatment, but be sure to take the entire course of antibiotics to stop pink eye from recurring.

Allergic pink eye is not contagious or infectious. It is usually a result of a known allergy such as pollen, pet dander or smoke that triggers an allergic response in their eyes. First of all, to alleviate the symptoms of allergic pink eye, the irritant itself must be removed. Try cool compresses and artificial tears to alleviate discomfort in mild cases. When the infection is more severe, non-steroidal anti-inflammatory medications and antihistamines might be prescribed. When the infection persists for an extended period, steroid eye drops might be used.

In all instances of pink eye, implementing sanitary habits is the surest way to prevent it from spreading. Clean your hands thoroughly and often and don't touch your eyes with your hands.

While conjunctivitis is typically a minor condition, there is sometimes a chance it could deteriorate into a more serious issue. If you notice symptoms of conjunctivitis, be sure to have your eye doctor examine you in order to decide what the best treatment will be. 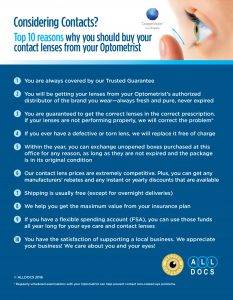